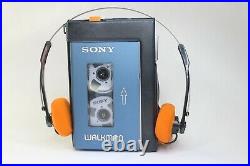 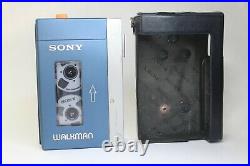 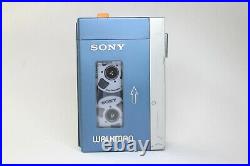 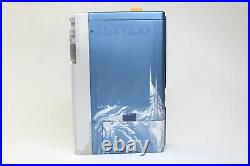 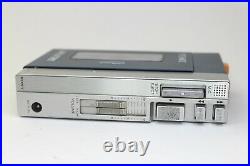 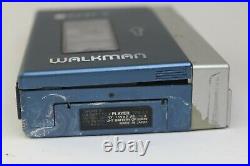 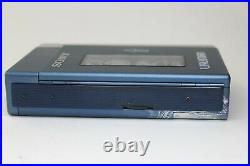 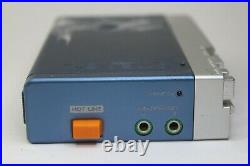 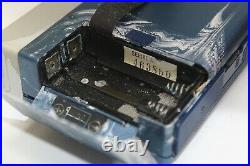 Here it is the one that started it all – the Sony Walkman TPS-L2 from 1979 – or maybe better known as the Guardian of the Galaxy Walkman. Initially they called it different things in different territories. Originally marketed as the “Soundabout” in the U. The “Stowaway” in the U. And the “Freestyle” in Sweden but in Japan they called it the Walkman – so many US businessmen bought them in Japan and took them home that the Walkman name stuck and was eventually used across the world. This is one of the latter ones that does have “Walkman” embossed on the front. Shame about the battery corrosion damage on the back and underside of the case – but thankfully there was no damage to the electronics or moving parts – and thanks to the belt-clip case noone can see the back anyway. So this should be the perfect TPS-L2 for all you budding Starlords, working perfectly but a bit cheaper because of the damage on the back – it has the belt-clip case so you can wear it on your belt. I’ve included a pair of cheap look-a-like headphones with orange foams – these are not the original headphones. You won’t be dissapointed when it arrives! As with all my refurbished Walkmans you don’t have to take my work for how good they sound because I provide you with a video so you can hear for yourself. I’m not a professional sound engineer – I feed the output from the walkman into the mic input on my Canon DSLR. These are complex analogue machines in a digital world – the old belt residue must be completely and meticulously removed – otherwise the new belt will wobble causing wow and flutter. Mechanically the motor had ceased and the belts had hardened so would no longer play – so I’ve installed a brand new SONY MNF-1600B motor along with 2 new belts, cleaned the head, roller and volume potentiometers – so it now plays perfectly, in stereo, at the right speed with no wow or flutter, it rewinds and fast-forwards exactly as it should. The volume adjusts smoothly without crackle or dropout. Battery terminals are corrosion free. The weird “Hotline” microphone also still works perfectly. This Walkman is perfectly useable playing as good as the day it was new nearly 40 years ago! I have 10 years experience refurbishing 100’s of Walkmans! You get what you pay for – there won’t be any disappointment when it arrives – it will work as described! If it IS as described and you change your mind – relist it yourself and feel free to reuse my Listing, Pictures and Video Link – you’ll probably make a profit! I’m not an audio engineer which is why I include a video so you can hear it play and judge for yourself. I do not extensively test these over periods of hours/days – I don’t have the time. My only guarantee is that it should work as you see in the video when it arrives. All items will be bubble wrapped and dispatched in a rigid cardboard box to ensure that they reach you without any damage in transit. See my other auctions for loads more cool Sony Walkmans. Any pictured cassette tape is not included in the sale. The item “Sony Walkman TPS-L2, Case & Headphones Refurbished, New Belts, Works Perfectly” is in sale since Sunday, March 21, 2021. This item is in the category “Sound & Vision\Portable Audio & Headphones\Personal Cassette Players”. The seller is “yermawn” and is located in Glasgow. This item can be shipped worldwide.