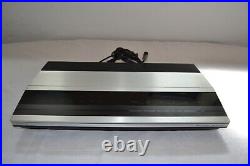 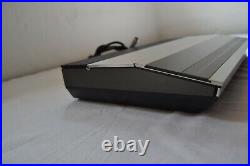 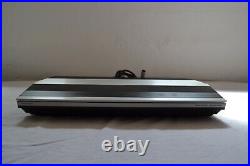 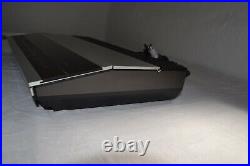 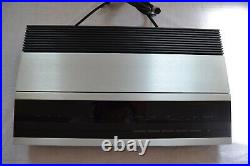 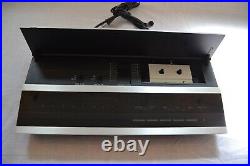 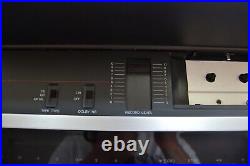 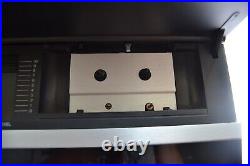 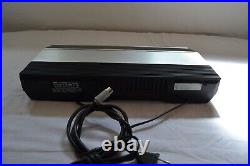 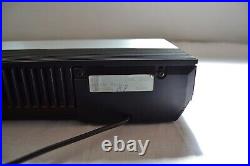 BeoCord 2000 Cassette Deck. Manufactured: 1983 – 1987 Designer: Jacob Jensen Colours: Metal Grey, Aluminium. Designed as a perfect match, both physically and technically, for the Beomaster 2000, this advanced slim-line cassette deck was nonetheless a serious hi-fi product in its own right, combining a high-performance specification with supreme ease of operation. Despite its unassuming appearance, Beocord 2000 contained a full pay-load of advanced circuitry plus a few extra features rarely found in cassette decks within this price frame. The primary controls – those concerned with tape movement – were totally electronic and designed on the Sensitouch principle. There were no knobs to turn or keys to press; a light fingertip touch was sufficient to activate any function. Ferric, chrome or metal tapes could be used, and dolby B noise reduction was included to ensure clean, hiss-free recordings. A clearly calibrated scale and input slider, together with large Peak Programme Meter, made it quick and easy to set accurate recording levels. These controls were placed adjacent to the cassette tray beneath a hinged lid which sprang open at a touch. Beocord 2000’s built-in microcomputer made operation fast and foolproof. It was possible to switch directly between any and all tape transport modes without harming the tape, the mechanism or the motor. Microcomputer intelligence also opened the way for additional control functions that contributed in a very practical way to daily enjoyment of taped music. A NEXT control allowed for easy track location (tape scan): one touch fast winds the tape to the next signal gap and plays the following track – automatically. So if you wanted to hear, for example, track number 5, just touch-and-wait four times and the place would be found for you. Similarly, you could repeat play-back of a favourite track up to five times with just a single touch. It’s such a convenient way of listening to exactly what you want, when you want. Beocord 2000 had a socket for data-link connection to Beomaster 2000 so that direct switching was possible between Beomaster, Beogram and Beocord in the Beosystem 2000. The deck could also be data-linked to Beomaster 5000 or Beomaster 6000, when all tape functions could be operated via the receiver’s remote control system. Beocord 2000 could be made up as part of the Beosystem 2000, when linked together with other compatible Bang & Olufsen products. It was also part of Beosystem 3000 if that is how you wished to use it. BeoCord 2000 Cassette Deck Product Specifications. Types: 2921 (1983 – May 1987) AUS 2925 (1983 – Sept 1986) GB 2922 (1983 – May 1987) USA 2923 (1983 – Dec 1986) Compact cassette: C46-C60-C90-C120 Noise reduction system: Dolby B Tape switch: manual ferro/chrom/metal Wow and flutter DIN. 56 dB TDK-MA Chrome Dolby B: > 56 dB TDK-SA Ferro Dolby B: > 55 dB BASF LH I Power supply: 2921 220 2922 240 2923 120 2925 240 Power consumption: max 20 W Dimensions W x H x D 42 x 7 x 24.5cm (12.5cm with lid raised) Weight 3.8 kg. This item is in the category “Sound & Vision\Home Audio & HiFi Separates\Cassette/Tape Players”. The seller is “kose.trading” and is located in this country: DK.